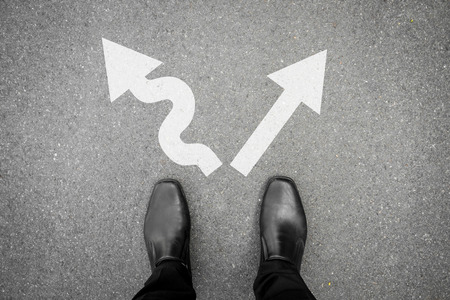 My own early career path is similar to many of my clients. I followed a certain educational and career path, found relative success, but was not happy.

The transition process is not a straight line from A to B. It is a twisty, curvy line from A to Z, with lots of stops, detours and surprises along the way.

I knew I had to make a change, but I did not know what that change was, let alone how to do it. I moved forward in fits and starts, two steps forward, 1 and 3/4 steps backwards. At times, I was deeply unhappy with the current situation – and at times I was wildly excited about my prospects. I was afraid I would never find what I was seeking, and once I saw the possibilities, I was afraid I couldn’t do it. I found my way and lost my way. And things took so much longer than I ever imagined they would.

I earned a BA in Computer Science from Dartmouth (it’s a very liberal arts computer science degree), and an MBA from Wharton. I always wanted to “have an impact on the world”, but I did not know what that meant. Although I had no idea what I wanted to do when I went to business school, it was the late 1980’s and hi-tech was very hot. With my computer science degree and my MBA, it seemed very logical for me to seek a job in the technology world.

After all, what was having a bigger impact on the world atthat time than technology? I found a job at Apple (“The Power to Be Your Best” and “Changing the World One Person At A Time”!), and after that held positions a Senior Product Manager at Sun Microsystems and a Senior Marketing Manager at Autodesk. I always worked on interesting, new, strategic technology. I made decent money. Other people thought some of my jobs sounded ‘cool’. But, I was increasingly unhappy in each job. My work didn’t feel engaging or fulfilling, and give me the sense of meaning I wanted. I was not having the impact I wanted to have.

The problem was: I did not know what kind of impact I wanted.

I tried very hard to make that career path work for me. For many people – and many of my own clients – this strategy is path that leads them to work that is better for them.

When I realized the strategy of changing companies did not have the impact on me that I wanted, I tried to put my emphasis on my personal and community life, becoming deeply involved in causes I believe in. That was great, and I did some great work and met some great people along the way.  However, I still had a yearning to experience more engagement and meaning in my work – so then I tried changing the content of my job within the company. In my last role in software, part of my responsibility included marketing to Universities, with the thought that Education was a way to have an impact. While this caught my attention for a while, I came back to a nagging feeling that there was a better fit for me out there.

Finally, in 1995, I quit my last full time job. I had some ideas, but I had no idea how to make them happen. Looking back, I don’t know how I had the courage to do it, but at the time, it felt like survival. Quitting, for me, was one part act of desperation, one part leap of faith. It’s not the right choice for everyone, but in retrospect, it was the right choice for me. I still don’t know how I found the courage, but I am glad I did.

After taking about 6 months off to get myself back to center, I retained a career counselor (Sue Gould, now my business partner (note: Sue retired circa 2010) who suggested I get some consulting projects to, as she put it, “Buy more time.” After 9 months of working for myself, to my surprise, I was hooked. I thought I would hate working for myself, but I loved the freedom and flexibility. Some of my fears about working for myself were, in fact, true – I did worry more about money, I was unsure about building a business and I was more lonely on my own. However, they weren’t as important as I thought they would be – the freedom to choose the work I did and the people I worked with turned out, at that moment in time, to be the most important thing to me.

This was a big lesson for me: don’t assume you know how you will feel before you experience something. Working for myself was the right choice at that moment.

I found myself surprised to enjoy working for myself — but the only problem was I didn’t actually like the initial content of the work. I wasn’t having the impact I wanted to have – and I still did not yet know what I wanted that impact to be.

About 18 months after quitting my job, I took the first in a series of coaching classes. In the middle of this first class, on my birthday no less, I had a breakthrough. “Oh,”, I thought, “This is the work I have always done. I just have not always been paid for it.”

In truth, I had always been a coach. I had always been deeply committed to figuring out how to make work better for people. For example, although I was a Computer Science major, I did an independent research project, under the tutelage of a former dean of the Tuck School of Business, on how dual career families made it all happen. There is always someone in an office that people walk in their office, close the door and burst into tears — I was that person. My colleagues sought my counsel on professional and personal problems. I was always invited to meetings for my strategic input and ability to keep the meeting moving. And, I was always aware of the political structure in the organization, advising others on how to navigate through it (even if I didn’t navigate it myself).

The process of transition is really about a shift in identity. If you are an Investment Banker and want to be a psychologist, you have to shift your identity and BECOME a psychologist. If you are Director and want to be promoted to Vice President, you have to BECOME a Vice President. One identity shift – going from single to married (and back again) – is an identity shift that people over look.  In my experience, it is easier said than done.

In 1997, I became a coach, and set out to create a coaching practice. As I’ve learned, the transitions don’t stop at the moment of insight – it still takes work and determination to put the vision into action. It took me a little while to shift from talking about “I am creating a coaching practice” to “I am a coach”. My coaching practice has changed over the years, as I myself have changed, learned and grown. I’ve come to see that I have expertise in the process of transition, and work with people who want to make changes in their work and their lives. My own process of transition has led me to work that has the kind of impact on the world that I want to have — and the process itself, while having ups and downs, has been rewarding.

We are undergoing transitions all the time — we really cannot stop the process. Even though I love my work, it is constantly changing, and I constantly change it. If I pay attention to the transition process, and am willing to do a little hard work, the changes can be fun and rewarding – and lead to continually re-creating a full, rich, engaged and fulfilling life.

Transitions: To Be Continued

If any of this story resonates with you, let me know.

(This was originally written in 2004. I have been through several career and personal transitions since then – including now I am an educator, teaching coaching and leadership at Stanford Graduate School of Business. I’ll write about those in the near future — Ricki 2017)

Ricki Frankel is an Executive Coach and Consultant in private practice, and a Lecturer at Stanford’s Graduate School of Business (GSB) Over the last twenty years, she has developed an expertise in helping people create meaningful work (and lives), and catalyzing change and transformation.